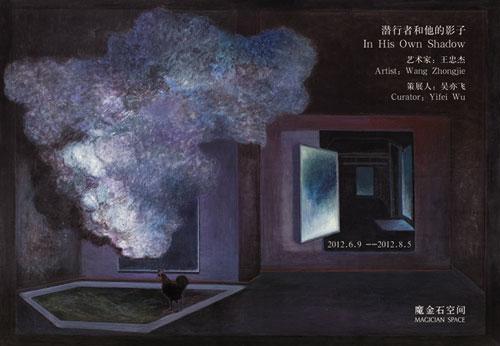 Magician Space presents the first solo exhibition of Wang Zhongjie – In His Own Shadow, opens June 9th and will run through August 5th 2012.

Wang does not want to be confined within time. He has remained in his hometown – Zhengzhou in Henan Province his whole life, contemplating the questions in life that he is most concerned about. Painting thus became his only thinking aid. “I do not exist, Xiaoshu (his seven year-old son) is the only thing that is real.” says the artist “A crowd of people pass by, many of them are fullfilled, but there’s one person who is not – I am one who is void of anything.” In his recent works, everything with any representation is dissolved in the center of the painting or overlapped ormerged into graduated colours, and the inclining frames reveals his current anxieties and suffering.

This exhibition is curated by Yifei Wu, a selection of works from different stages of his career will be showcased as an attempt to convey the development of the artist’s thoughts – an opening to a path into understanding his works.