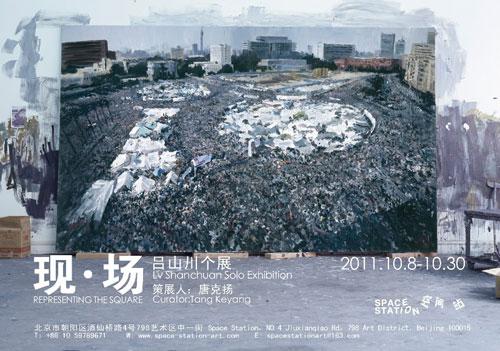 REPRESENTING THE SQUARE— Space Station will present Square Series, Lv Shanchuan’s recent oil paintings, on October 8th, 2011. This is going to be the third solo show of the artist, who has participated in the 2009 Shanghai Biennale. Tang Keyang, the curator of 2010 Venice Architectural Biennale, collaborates with the artist for an in-depth interpretation of his works. In the three-week exhibition, content of the show will be weekly rotated with different works in the same series and Space Station will also exhibit some contextual materials including relevant documents and images.

People will respond to Lv's Berlin Square with immediate amaze. The crowd roll over a large square, covering the attraction of numerous buildings which bring our eyes a stronger shock and lead us into further visual details. Scenarios emerged around these buildings made different faces for the Square over a long history. This history is about an evolution of the public space with their dilute meaning in the 20th century. Interestingly, Lv might be self-contradictory while painting works like these: on one hand, all inputs come directly from reality. On the other hand, the reality as depicted tends to be self-defying.

The artist's passion for visualizing "events" in his earlier works corresponds with his "Square" series in many aspects. For him, the daily words on newspapers compose some kind of "Puzzles of Senses" because there is a competition between its form and norm. In details, the more blocks one “Puzzle of Senses” has, the more diversity it gets. When they are transplanted into a neutral yet alien context, the original implication will be readily turned upside down. In 2005, the artist had lived in Germany for some while. And this foreign experience gave a vivid presentation of “Puzzle of Senses.” It also enables the Chinese artist to cut an unique slice into the Western history and politics. During his German days Lv had to rely on a few local Chinese newspapers for updates. For him, fresh new-generation jargons like "Super Girls' Voice" were both strange and tangible. These self-containing words could register to an equally self-containing image that was immediately recognizable, though they  also felt distanced for their lack of precise meanings. While there are no legible faces and signs, the strong materiality that oil paint embodies endows Lv's work with a surrealist feel as if you were "at the scene." (In Chinese the phrase "at the scene" also literally means "representing the Square" )

In a similar way, his “square” series repeat the "event" series, visualizing an “event” simultaneously in its visual and semiotic context. By doing so, the artist is fully aware of a deep contradiction between structure and individual, representation and presentation. As repeatedly mentioned by E. H. Gombrich, a seemingly cursive stroke is composed of both the physical “nature” of a thing and its highlight. With the masterpiece of Renaissance artists, the deliberate optical illusion both convincingly depicts the “truth” and places it under shadows. That is because you can only come to the "truth" in a general yet total impression but could never not tell which is the real “individual” – as the acclaimed basis for the “whole” meaning.